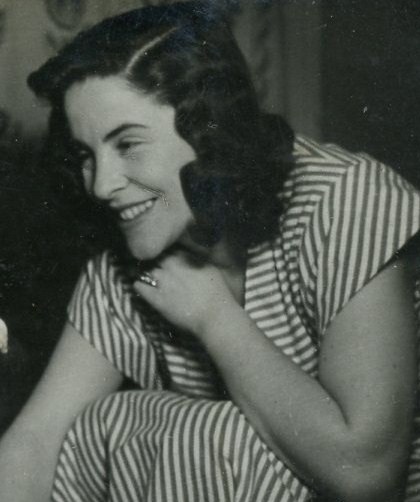 My father was a very private man. When I gave a eulogy for him 14 years ago, there were few people present here.

The obituaries tell the stories of Judy’s life.

What I would like to celebrate now is the goodness which was so central to her character, to her very being.

A goodness that radiated from her and that was palpable. No-one could fail to notice it.

There was not a mean bone in her body and she was the only one I have ever known for whom everyone who knew her felt at least affection and friendliness.

This goodness was mysterious, spontaneous and innocent.

Unsullied by the horrors she so personally encountered as a young woman, untarnished by her success as an artist or by her popularity, this quality was not hidden. It radiated.

All of you who knew her even a little know exactly what I’m speaking of.

In her declining years when dementia stole her memory, this was not stolen. The presence of so many staff from the nursing home where she spent her final year and other carers who only lately met her attests to that.

She was a refugee washed ashore after the murder of most of her family and community. How fortunate for all concerned that this country, in its own young innocence and goodness welcomed her aboard.

I moved back to Sydney in 2008 after an absence of 40 years so as to be closer to Judy in her decline. She had kept a diary since the age of 12 and almost daily I read it to her. When we finished the 2000 typewritten pages (now bequeathed to the National Library) we started from the beginning again. It turned out that the memories were all there, it was the mechanism to retrieve them that was shattered.

When my son Bodhi would come to visit her, she was just as besotted as when he was born, and what a joy to see her delight in the nursing home with my second son River and with Bodhi’s daughter Jala.  Bodhi wrote yesterday, “We loved each other so much and had such a great friendship. She used to say that it didn't feel like there was 57 years separating us.

About 5 years ago, Judy and her family began gifting our large collection of her paintings to National, State and Regional Galleries. She is like a dandelion ripening and scattering her tribute to the 4 directions. My brother and I plan to continue this process with gifts underway to public galleries, universities, schools, nursing homes and other cultural organisations.

I haven’t felt sorrow at her passing. Her life was thoroughly spent; she was ready. Nothing remained to be done. She was mostly free from pain till the end and at peace. She died with a smile.

I want to thank all the people who have cared for Judy these last years, most of whom are present here, especially Panni.  (who she loved like a daughter)

What a privilege to have known her. If only more of it had rubbed off!