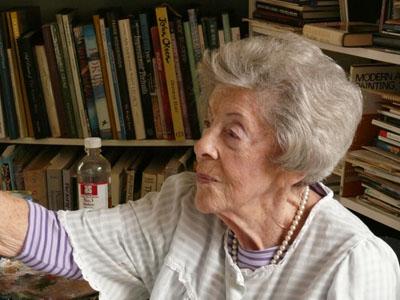 CONVERSATIONS WITH JUDY & A STRINGBAG OF ADJECTIVES

“I just can’t do it.  I can’t complete a portrait of you in ten minutes, Judy. Have a heart.
Just do your best.
You know that getting an image – a really accurate likeness – is not so easy, unless you have the gift.  I’m not like you.  I need time.  Let me have an hour.  At least half an hour.
On no account.  These are busy people.  They have to get back to their offices or daily work.  No time to sit around listening to you.
But I will not do you justice.
Anyway, no portrait is complete.  The last brush strokes belong to God.
God would give me half an hour!
I am sure you will do well enough in ten minutes.  The audience will be benevolent.  They will fill in the gaps.”

And so, craving your indulgence and supplementation by memory and imagination, I offer a pen portrait of Judy Cassab.  I will try to do it, as the Lord Protector Oliver Cromwell once commanded, ‘with warts and all’.  And I will offer it in the Impressionistic style.  It will be no more than a stringbag of adjectives that come flooding into our minds when we think of Judy Cassab.   She was one of Australia’s greatest artists – a mighty portraitist.  Winner of this and that.  But I want to speak of Judy the person.  Judy the refugee.  The mother.  The human being.

Judy was joyful.  She had a lovely smile, always at the ready.  She beamed at us.  And her eyes were smiling.  This was no mouth and teeth job.  Eyes and heart were smiling.

In his funeral eulogy for his mother, Peter Kampfner recounts a visit to the nursing home, near the end when Judy had partial dementia.  ‘How is my favourite mother today?’ he asked, producing smile number one.  ‘I love you’, he added: producing smile number two.  The smiles grew out of love.  How good that Peter used those words. “I love you”.  There is something in the water of most Australian males that they cannot bring themselves to say them.  If only we had all said those words repeatedly to our mothers and our fathers.  And to those we loved or love.  Today is the 47th anniversary of my meeting my partner, Johan.  Tonight I will take a leaf out of Peter’s book.  I will say those precious words: ‘I love you’.  This too is an occasion to offer the coin in payment for Judy Cassab’s smiles.  We are here because, in our different ways, we loved her.

But Judy was professional.  She was highly organised.  She was disciplined.  She was focused on her work as an artist.  She worried about her faults of omission as a wife and a mother.  When she set to work, her concentration and devotion to the task in hand were formidable.  At such a time, she was Judy the artist: someone not to be messed with.  Giving commands to Queen Sirikit of Thailand to turn off the radio so they could converse to inspire her brush.  Speaking to the subject of her portrait, to bring out the hidden emotions.  Judy at work showed eyes of great determination.

Judy was also surprising.  Getting a likeness was relatively easy for her.  But she had to get started.  On my portrait, she needed something I could not myself give in my appearance.   Props.  Clothing.  Some colourful item to catch her eye and take her back into the dream world of painting.

In my case this source of inspiration did not come at once.  Lou Klepac had asked that I be portrayed in an open necked shirt.  This was despite the fact that the last time I had worn one was at the age of six.  Judy agreed.  Robes would add colour: lots of colour.  ‘You leave it to me.  We are a democracy of three.  We too will out-vote him’, she said, her eyes and smile full of mischief.  She seized my doctoral robes with their vivid silk of crimson and azure blue.  ‘Aah’, she exclaimed.  And immediately she was at work.  Something in the shimmering silk triggered a button in her mind and she lifted her brush.  The work was started.

Judy was also smart and determined.  After all, she had escaped the fearsome horrors of the Holocaust in Central Europe.  She had moved from Austria to the freedoms of Czechoslovakia.  When those freedoms were stamped out, she hid in Hungary.  It was a greatly perilous time.  The exact size of the Jewish minority in Hungary at the start of the war is a matter of dispute.  It was probably about 800,000 souls.  How many survived is also hotly contested.  But it was likely no more than 120,000.  Trains with eight carriages took 4,000 people, pouring their hopes and fears over and over again daily, into the horrors of Auschwitz.  But by luck and courage, Judy and her husband Jancsi, somehow survived.

We should reflect on the fact that Judy was repeatedly a refugee.  Eventually she left Hungary, under the Communist regime, and came to Australia in 1950.  She kept a controlled demeanour always.  But in her thoughts and dreams were the memories of terrible fears from those times. We in Australia need to think of the blessings of earlier refugees who brought their lives and their talents to us.  We need to think of them when we reflect on the camps in Nauru, Manus Island and Cambodia and out there in the red desert, all set up in our name.

Judy was adaptable.  She could mix with kings and queens and with the poorest artists, seeking her guidance.  She was generous to beginners. She was particularly supportive of women painters.  Yet she was flinty and truthful in the advice she imparted.  She could mix with princes.  But she never forgot the cellar in Vienna where she huddled, immediately after the War, hungry and uncertain as to what Fate could have in store for her.

Judy was proud.  She loved occasions, such as this, when a fuss was made of her.  She was proud to have twice won the Archibald Prize Australia’s most famous award for portraiture.  She was proud to be the first woman artist with that measure of success.  She was proud of her gongs and awards, which were many.  But, above all, of her sons and grandchildren.  She knew that she was gifted with genius.  It came naturally to her.  Against the background of her wartime years, she was proud to have reached a time where her talent was recognised and praise rained gently down on her.

Judy was formal.  Perhaps this was inevitable for a young and beautiful woman, born and living for a time in Vienna, before the Anschluss.  And in Budapest.  She was a kind of princess herself. She was always immaculately turned out.  Even when engaged in painting, her clothes looked as if she would soon put down her brushes and rush off to a reception at Government House.  She had the formality of middle European gentry.  This was so, although she had been forced to survive in gruesome places of starvation and desperation.

Judy was inspirational.  She was also highly successful.  She was talented; but extremely hardworking.  She threw her all into the work that was, with love, the centre of her life.  Accurate images emerged naturally from her brush and pen strokes. And all the while, she was calm, self-contained and open to new ideas and challenges.

“See.  I told you, Judy, I could not get an image.  Not everyone has your gifts you know.  I needed more time.
You did the best you could in the time available.  Don’t be so hard on yourself.
But I wanted this to be perfect.  You are always such a perfectionist.
It is good enough.  Think of your portrait as a kind of impressionistic work.  You have illustrated your theme with a collection of images.  Your portrait is a series of collected dots.  Like the art of our beloved Aboriginal artists.  Those who are looking at it will join the dots together in their own minds.  They will fill in the spaces from their memories and imaginations.  And anyway, as I told you, the last brush strokes belong to God.
That’s as may be.  But all I can offer is my stringbag of adjectives.
Don’t worry about it Michael. God will add the magic.  And I am reasonably sure that God will be kind.”

The portrait of Michael Kirby by Judy Cassab hangs in the New Law School of the University of Sydney.  It is reproduced in Lou Klepac OAM, Hon D Litt (ed), Judy Cassab – Portraits of Artists and Friends, Beagle Press, Sydney, 1998.